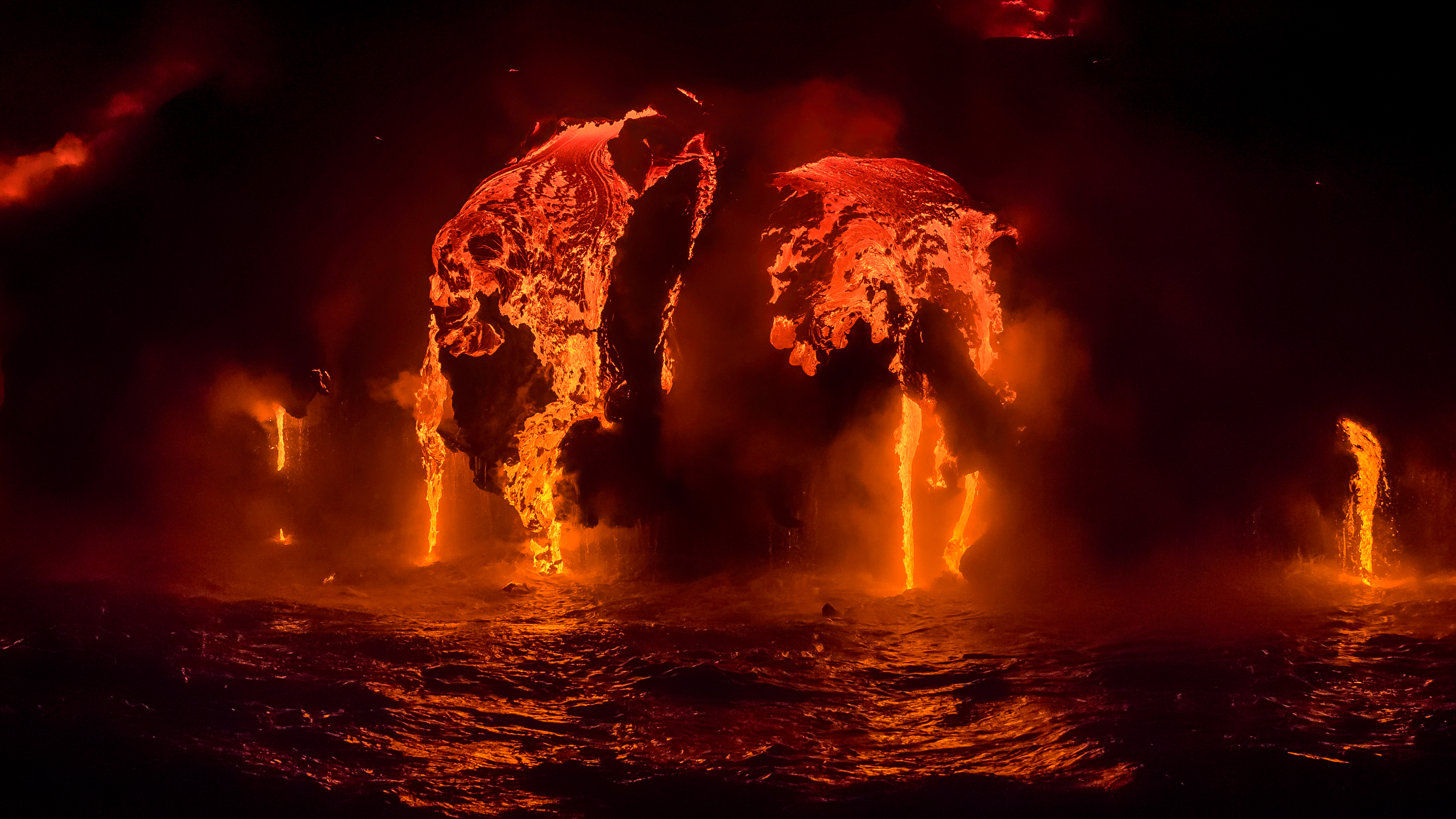 I have never been more challenged behind the lens than when I photographed lava at night from a moving boat. As many of you probably know, I love night photography so I’m no stranger to low-light shooting. Normally, I have the luxury of shooting with a tripod. This was not the case on my recent visit to the Big Island of Hawaii.  In this article I will share what I learned about how to photograph lava on land, by boat, and by helicopter. 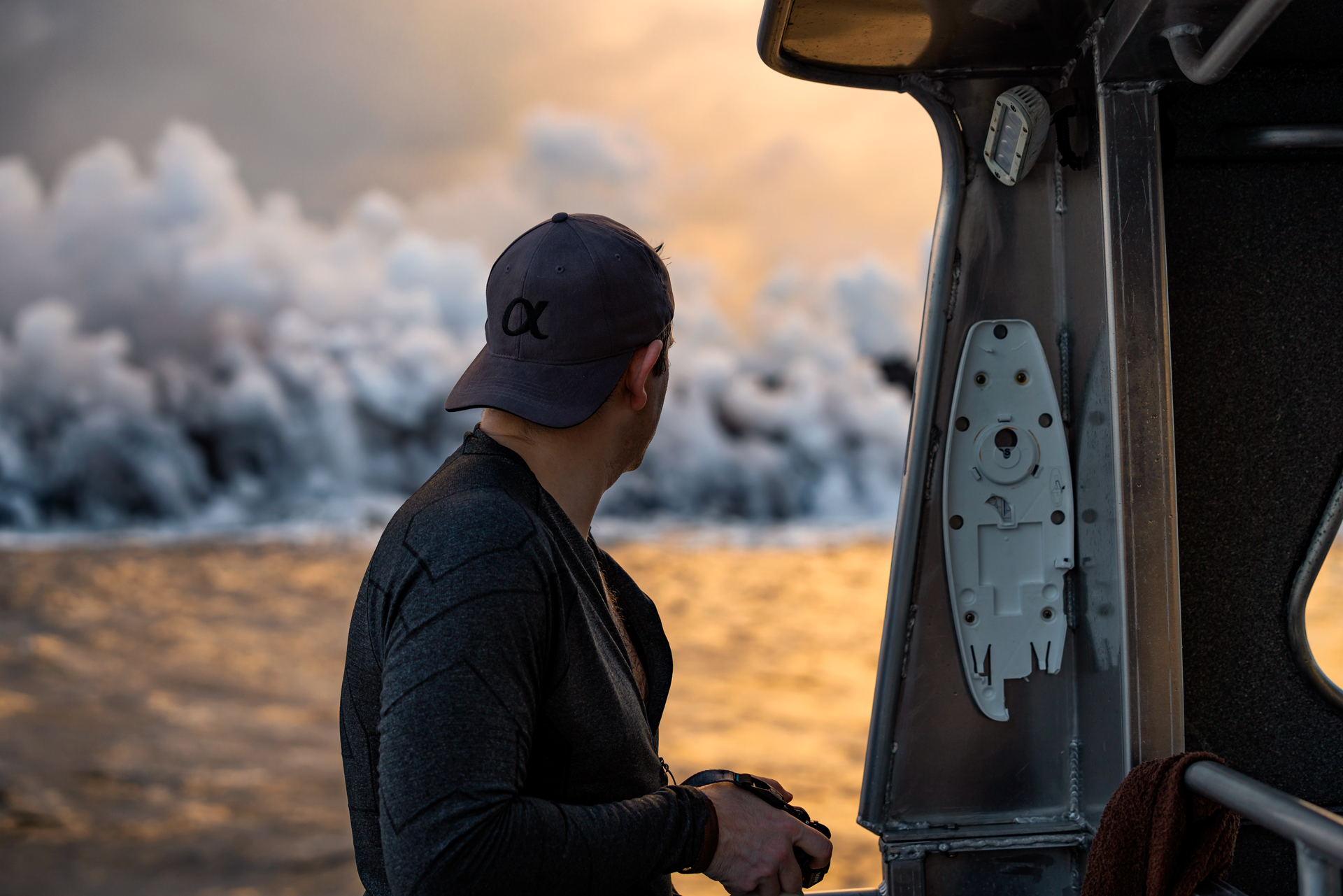 I have visited Hawaii numerous times to shoot the lava. On my most recent trip in June, 2018 the eruptions were intense and viewing the lava was restricted to boat and helicopter. On a previous visit, in early Aug, 2016, the lava could be safely viewed on land as well.

My favourite shots of the lava have all been of the ocean entry from the deck of Lava Ocean Tours’ ‘Lava One’  I highly recommend this option for anybody visiting the Big Island to see the lava. 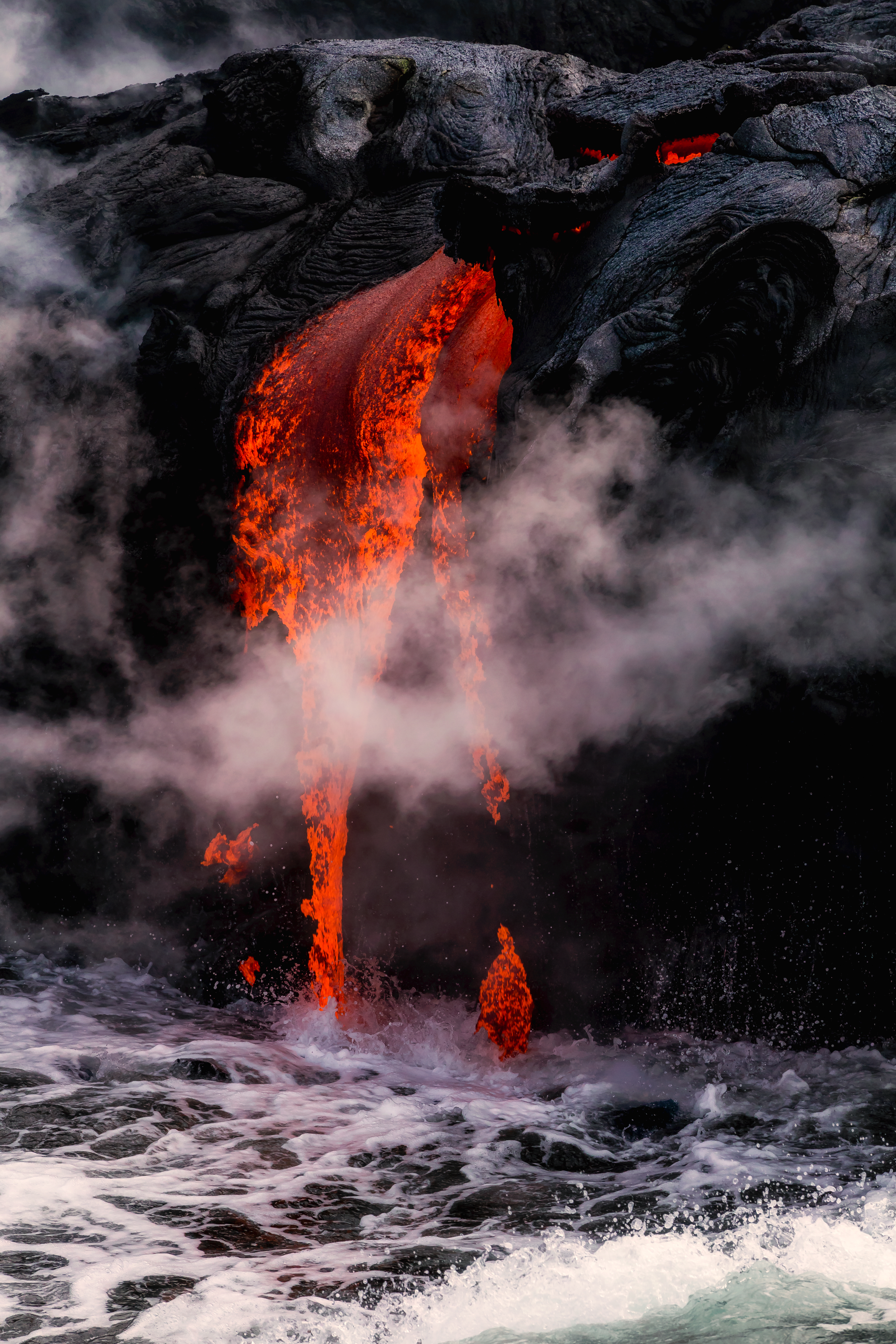 How to photograph lava from a boat

When photographing lava by boat, the best views tend to be when the tide goes out and reveals the details hidden below the surface of the water. In these brief moments you can capture droplets of water dripping from the surrounding rocks, and you can see the intricate details of the newly forming lava rock. 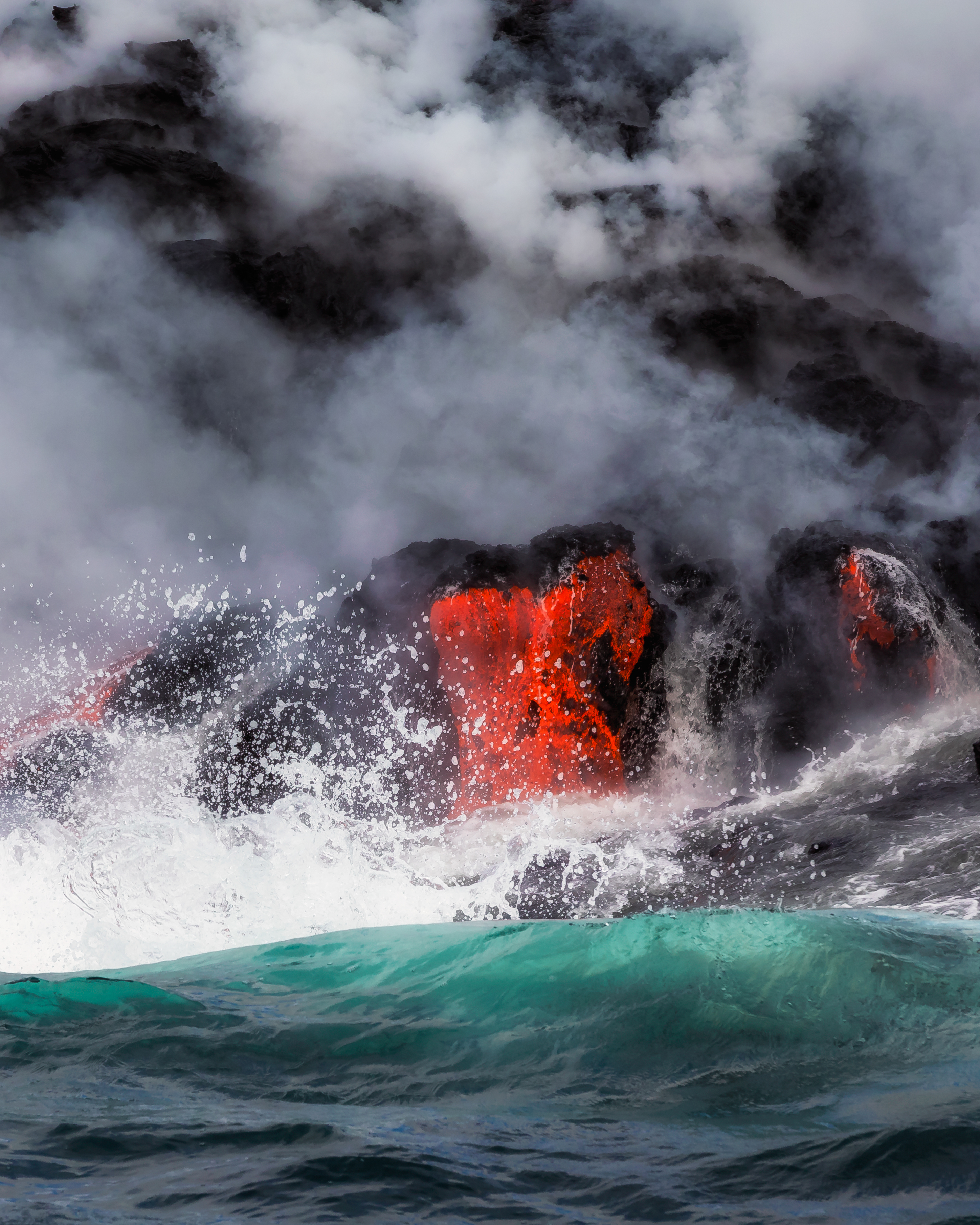 To get the best shots from a boat, you need to shoot in auto focus. Manual focus would be fine if you were standing still but because the boat is always moving, obtaining sharp images in manual focus is next to impossible.

I found that my long lens (70-200 mm) was invaluable. It allowed me to get tight shots and incredible detail of the different lava formations.

Daytime Camera Settings: You need a fast shutter, and a sharp aperture. I didn’t shoot under 1/500th of a second during the day. Most of the time I shot around 1/640 seconds.

Because I had good light conditions, I had the advantage of shooting at f/11. This is the mid-aperture range of my lens, and therefore takes sharper images than if I were at the extreme ends of the aperture range (f/2.8 or f/22). 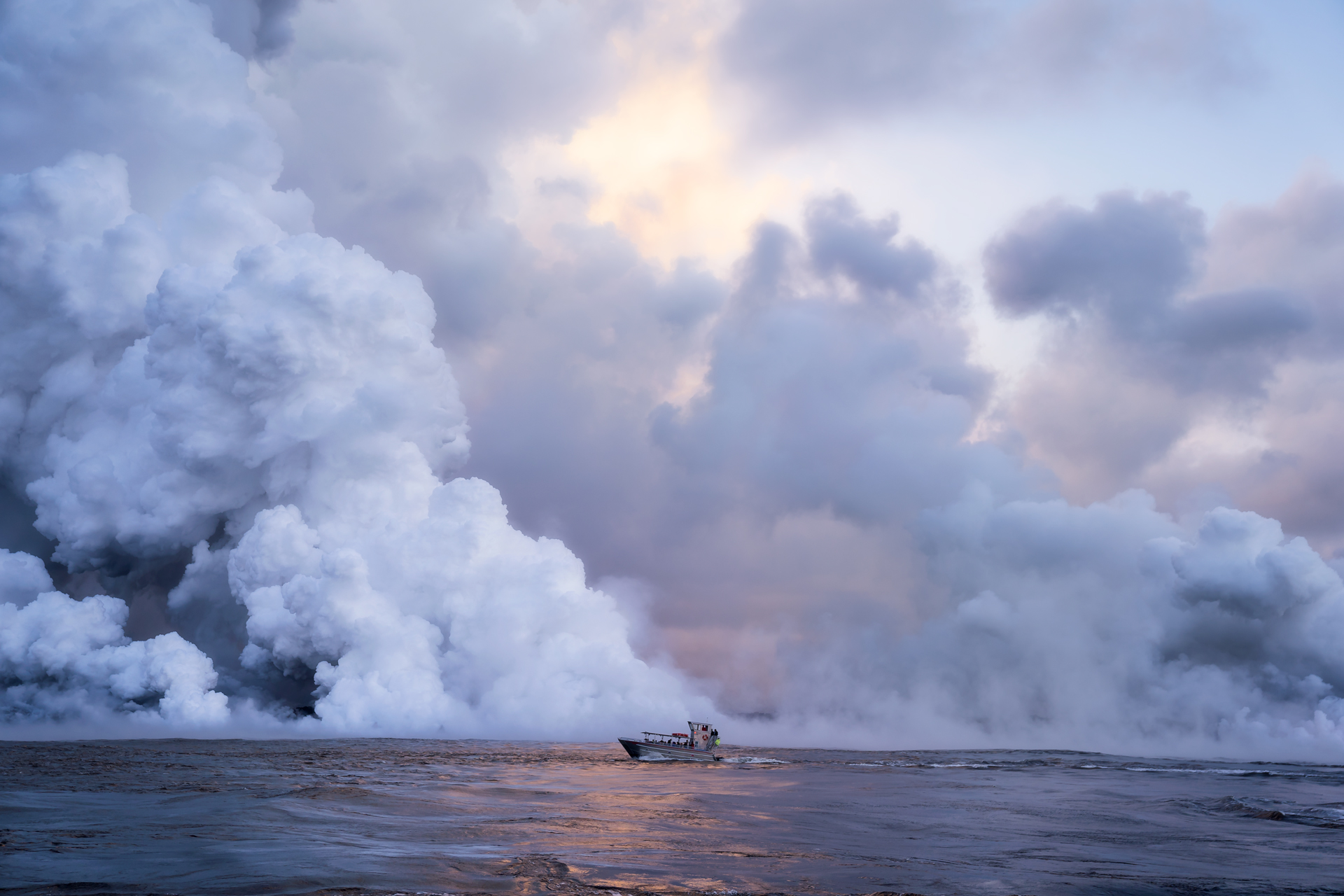 Once I chose my desired aperture and shutter speed, I set my ISO to 400. The day was overcast so if I had set the ISO any lower I would have had to choose a slower shutter or wider aperture.

Night Time Camera Settings: Trying to balance low light conditions, the need for a fast shutter, and shooting from a moving platform was super challenging.

Even though I was shooting at night, I still needed that fast shutter (at least 1/500 sec) because I was on a moving boat.  I also needed a wider aperture; I settled on f6.3. The lava was bright enough that I didn’t need to use my widest aperture range. Similarly, because I was night shooting I needed a higher ISO. However, the lava was so bright (and – thanks to Captain Shane – the boat got so close) I didn’t need to go higher than ISO 2000. In fact, shooting at anything higher than ISO 2000 tended to result in blown out highlights. 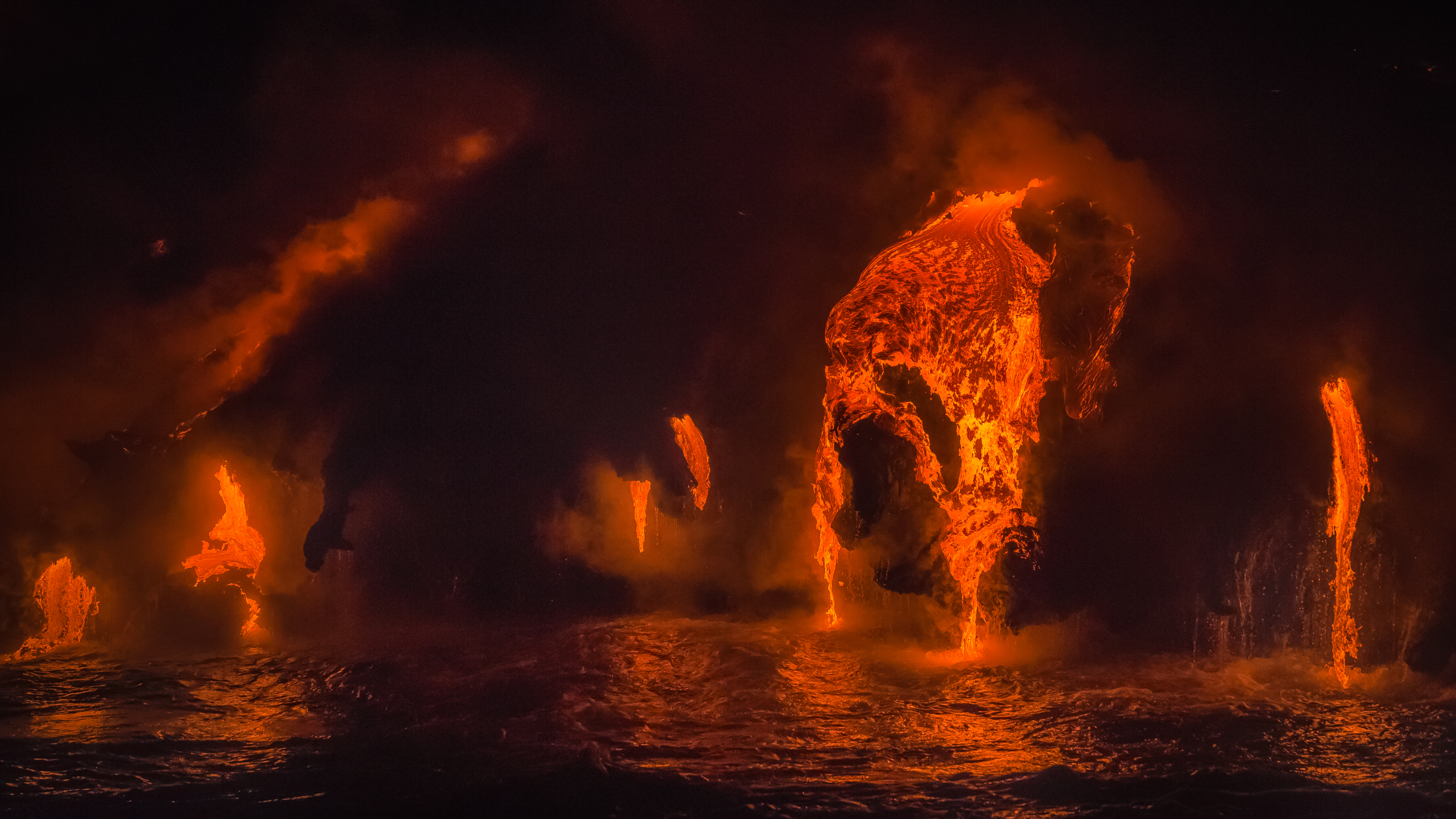 How to photograph lava in the field

Photographing lava out on the flow is much more like any other landscape shoot except it’s hot! My companion managed to take this photo of me about one minute before all of my mascara literally melted down the side of my face… 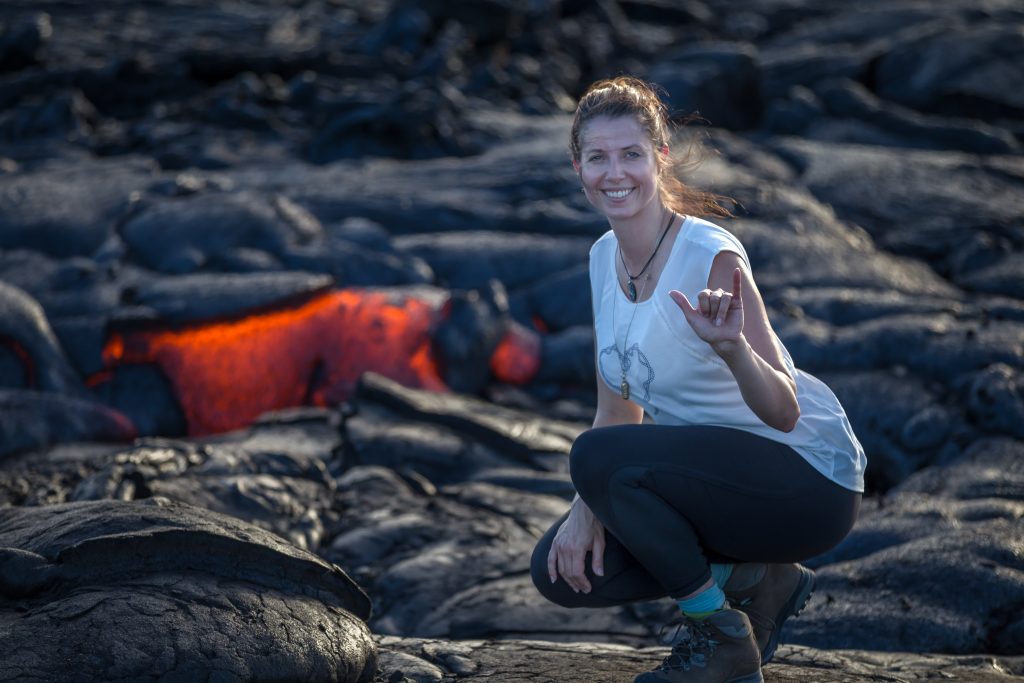 Two big challenges with photographing lava out on the flow are the heat and trying to stay hydrated. Just being so close to the hot lava is very dehydrating.  On top of that, the hike out to the lava field was  8 miles (12.5 km) round trip (at the time I visited). Between the hike and the heat you need to bring more water than you think you need.

Your equipment won’t like the heat either. Even though I only spent a few minutes at a time in close proximity to the lava, my camera got hot. Using longer lenses will allow you to get the shots you want without the risks of dehydration and overheating gear. 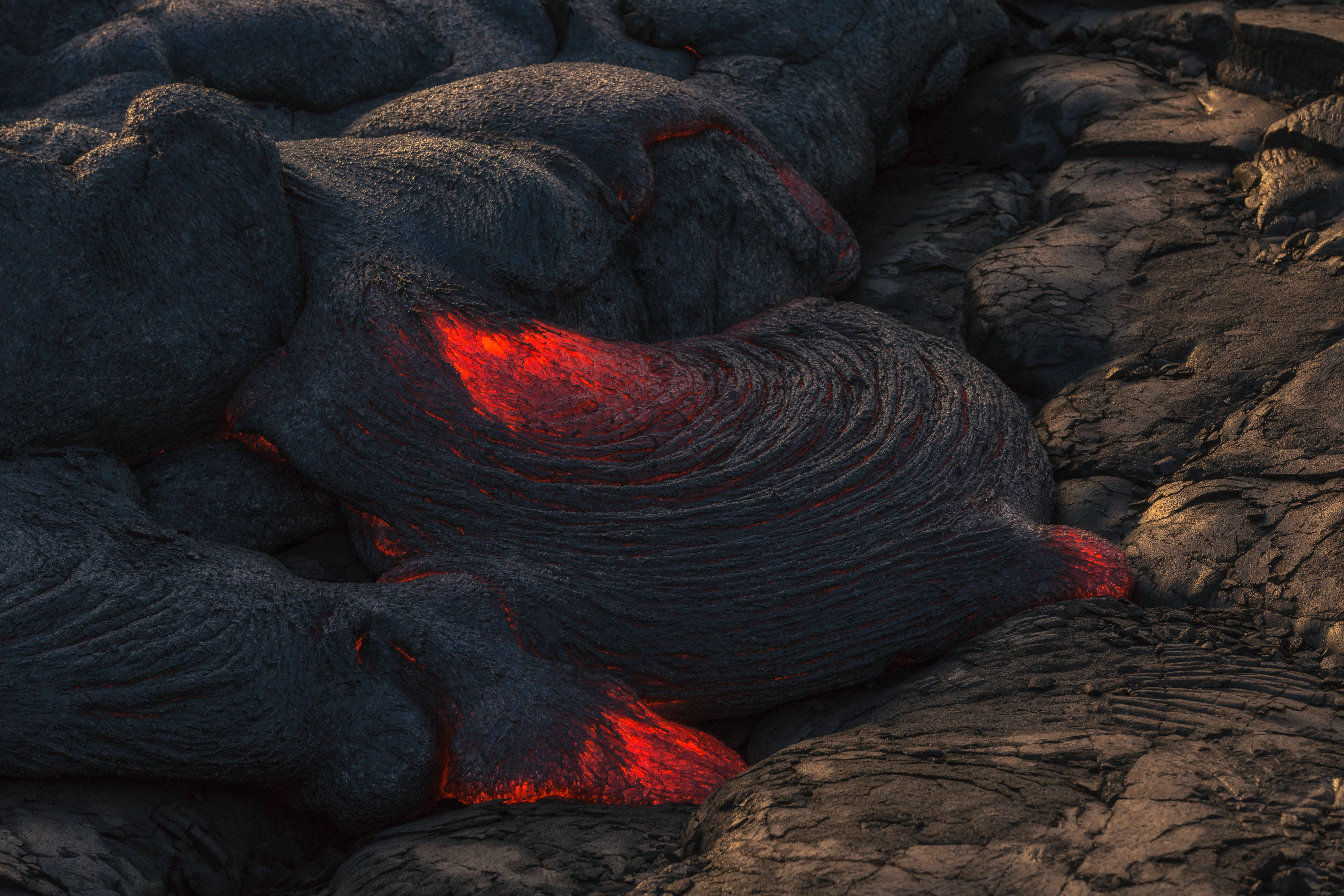 The other challenge is staying safe. You can literally walk over the active lava flow so there is a certain amount of risk involved. I was fortunate to be guided by the very knowledgeable John Tarson with ‘Epic Lava‘. He got me close enough to spit on the lava without it spitting on me!

How to photograph lava with the stars

You can also see and photograph the lava (from a distance) at a distance without doing any hiking. The photo below was taken from the viewpoint at the Jaggar Museum in April of 2016. Sadly, this viewpoint is no longer available, as the crater has grown so much since the recent eruption that the museum may be claimed by the ever-expanding crater.

Camera Settings: This photo is a single shot (taken from part of a time-lapse). I shot this on my Sony A7s, with the Canon 16-35 mm lens. The trick to getting the stars and the lava in a single exposure is not to blow out the highlights from the lava. There was no moon the night I shot this, so I set the camera to f2.8, 3200 ISO and 8 seconds. 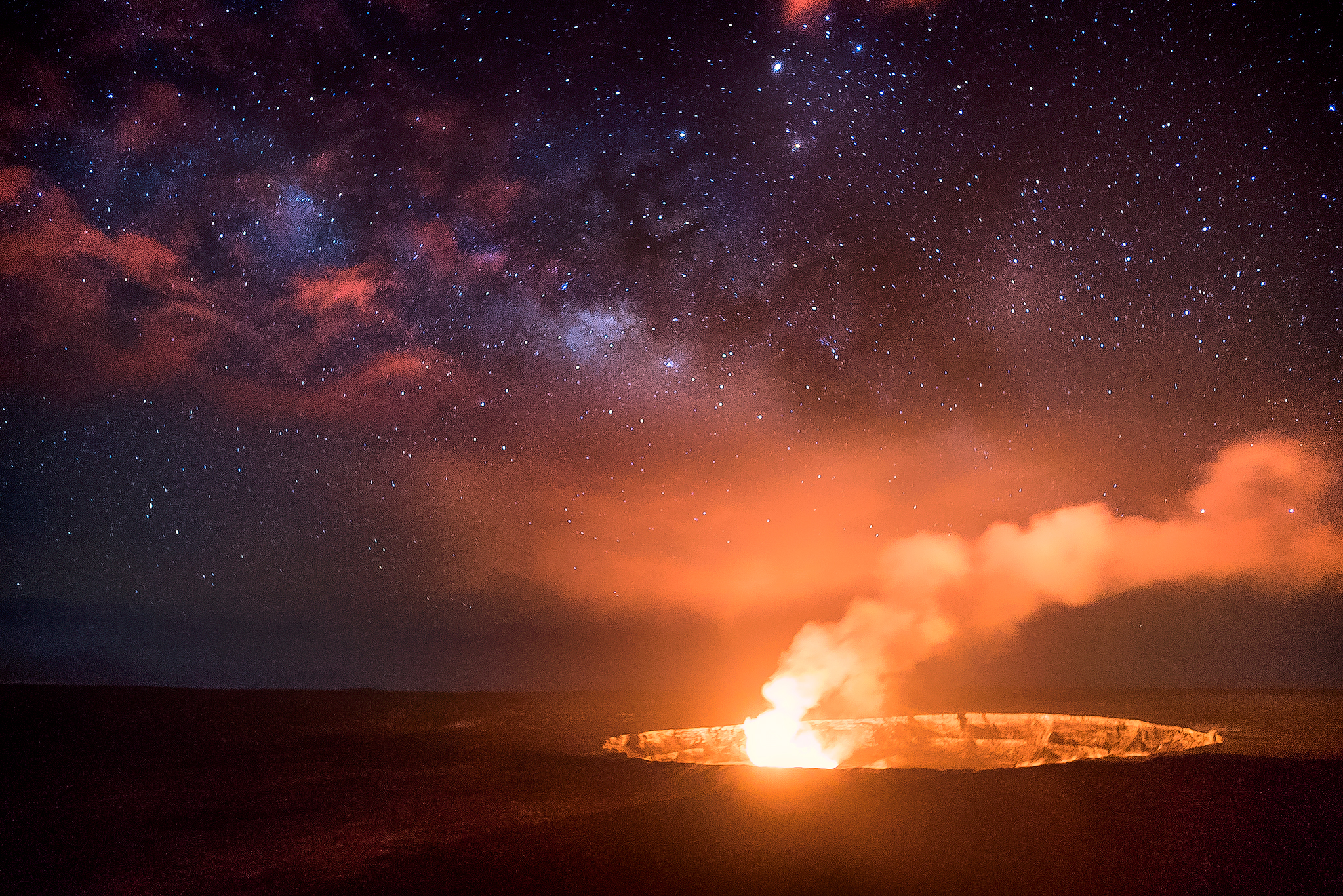 I hope that you have found the information here helpful.