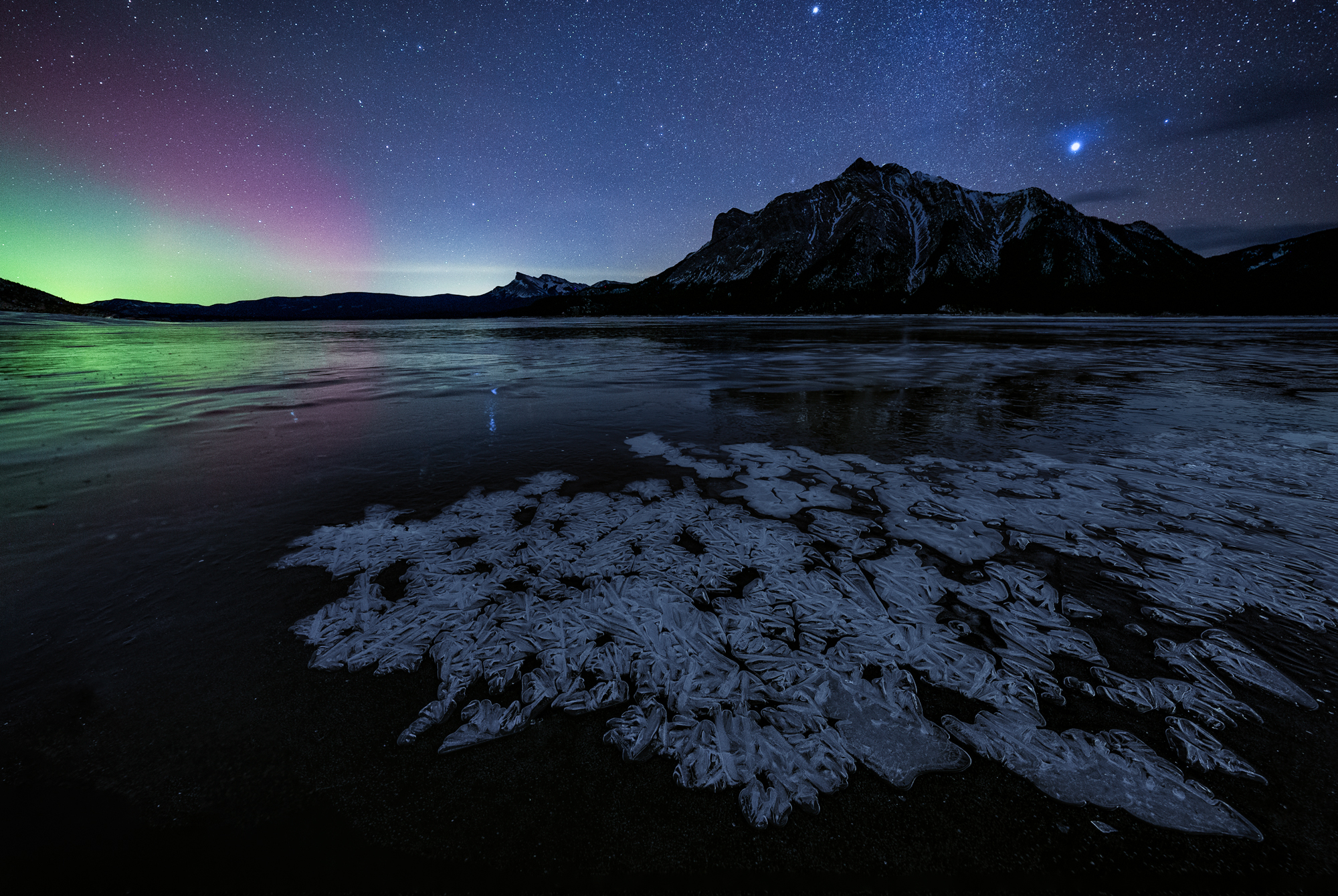 It is no secret that winter is my favourite season, and there are few places in the world that rival the Canadian Rockies for winter photography. The snow, ice, and frost formations transform the landscape into breathtaking and dreamy scenes that look as though they come straight from a storybook. Snow is the great simplifier of often complicated landscapes. 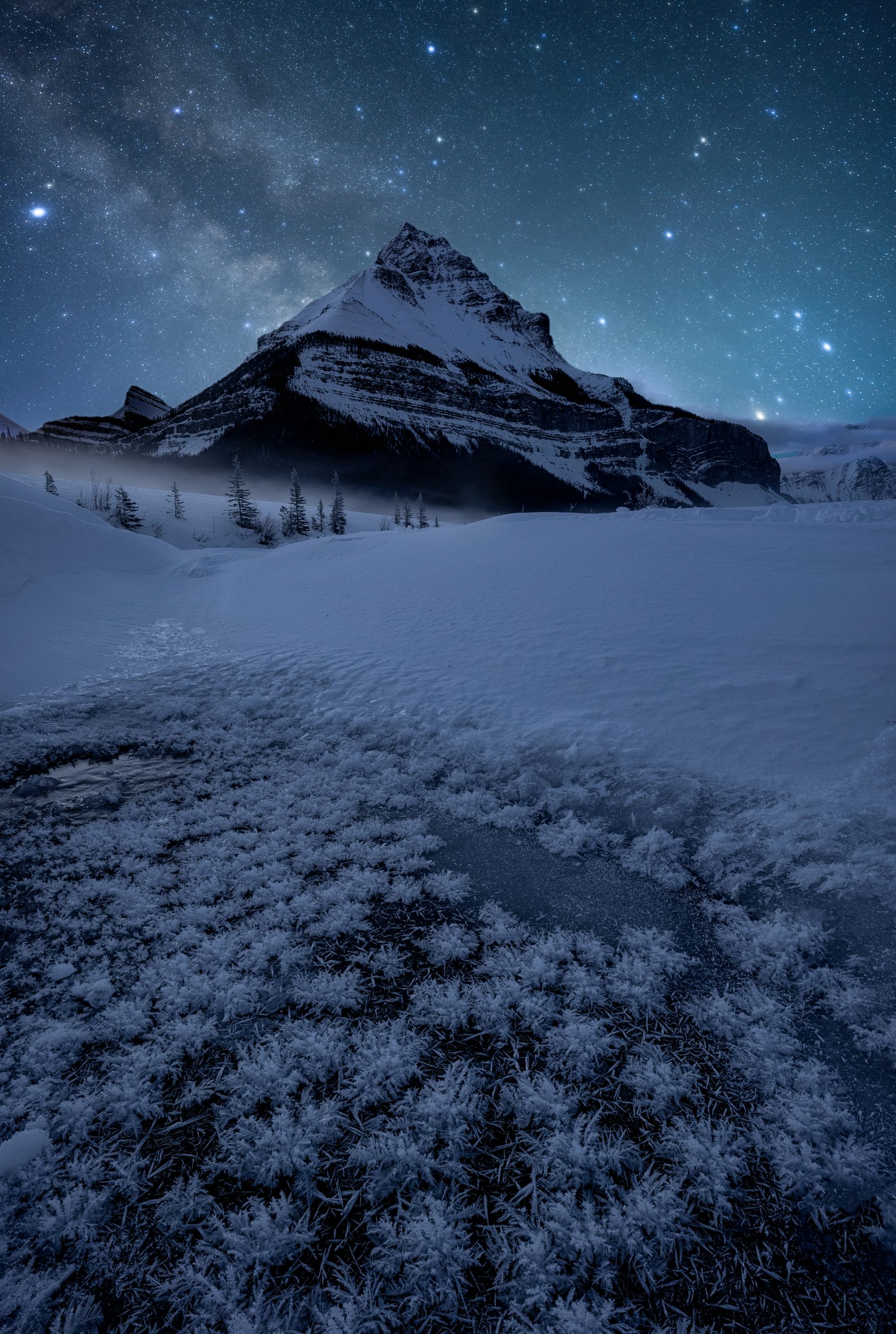 What you may not know, is that for a brief time in February, magic happens! It’s the one time of the season when all of my most favourite things about winter align: The frozen methane bubbles are stacked deep in the lakes, Orion is visible after the sun sets, the Milky Way rises before the sun rises, and the aurora graces the winter skies in a dazzling display of green and red. 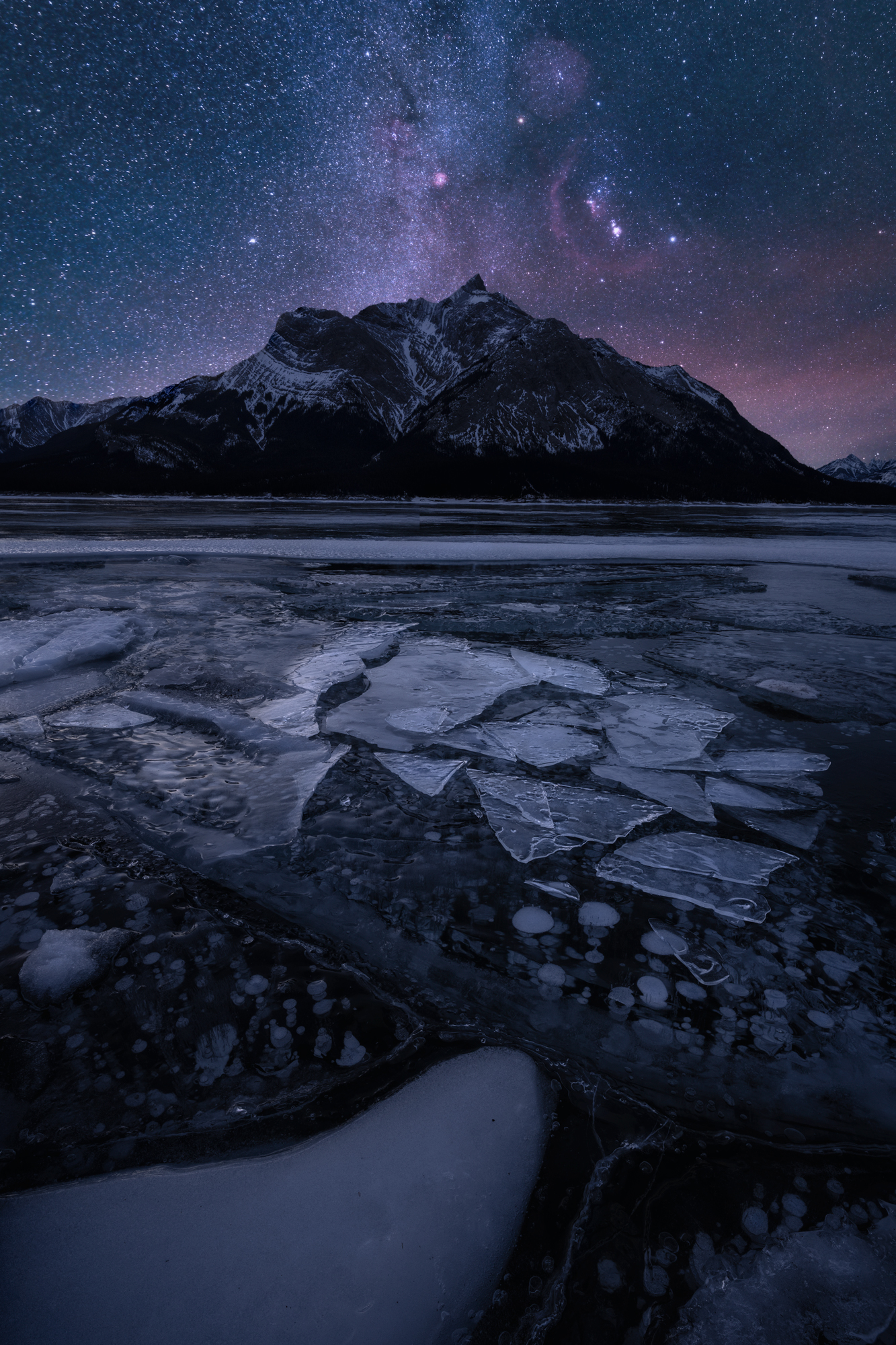 Never has the winter night sky held more allure to me, then when using the star tracker to shoot the constellation Orion. Shooting longer exposures, at lower ISOs helps to preserve colour in the stars, and enables shooting at narrower apertures, and thus capturing sharper stars.

For this workshop we will be working with star trackers to help us capture the nebulosity around Orion, and the amazing colour of the stars. Although astro modified cameras are not necessary for the workshop, they are amazingly fun to use!

I’m beyond excited to have Clarence Spencer from Spencers Camera join us for the week! Clarence is a pioneer in the field of star tracking, and modifying cameras for astro photography. In fact, his team modified NASA’s cameras for the International Space Station! Clarence will have astro modified cameras available for us to try out, as well as star trackers capable of photographing deep space constellations. 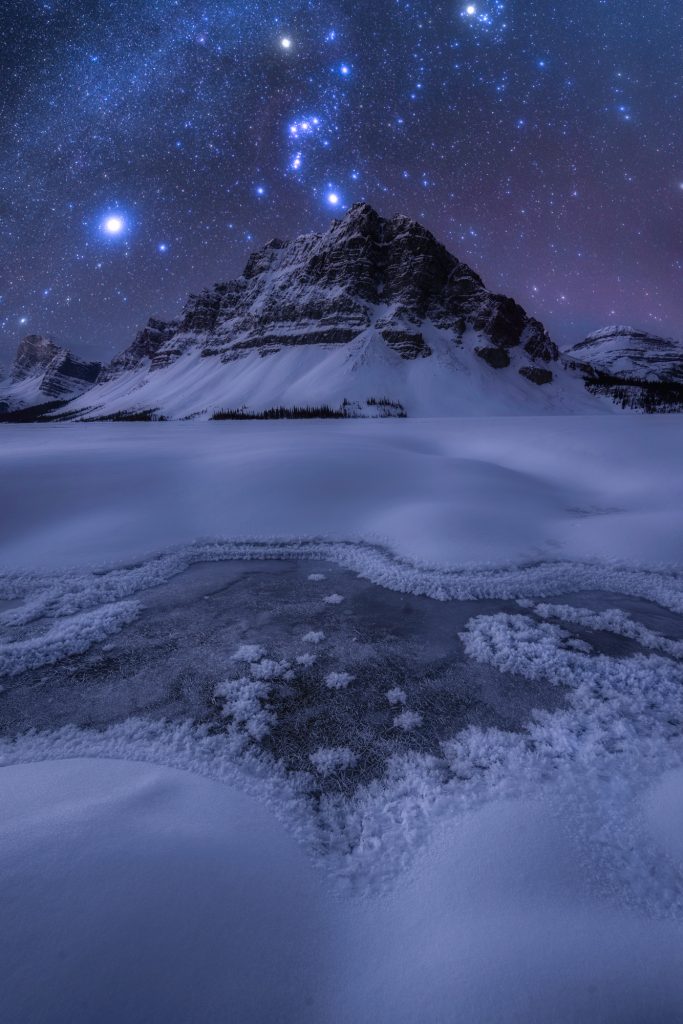 Orion shot on a non-modified Sony a1

February 2023 also marks a rise in Aurora activity for a couple of reasons. First, aurora activity is strongest during any given year around both the spring and the fall equinox (spring equinox occurs in the third week of March). Last February we had Kp6 and Kp8 conditions! At this latitude (51 degrees North), a Kp5 level aurora can be seen when looking north, and is often seen as dancing pillars of light. At Kp6, the aurora can be seen overhead and in any direction. At Kp8, you can film the dancing lights with your cell phone; it’s an utterly breathtaking experience! 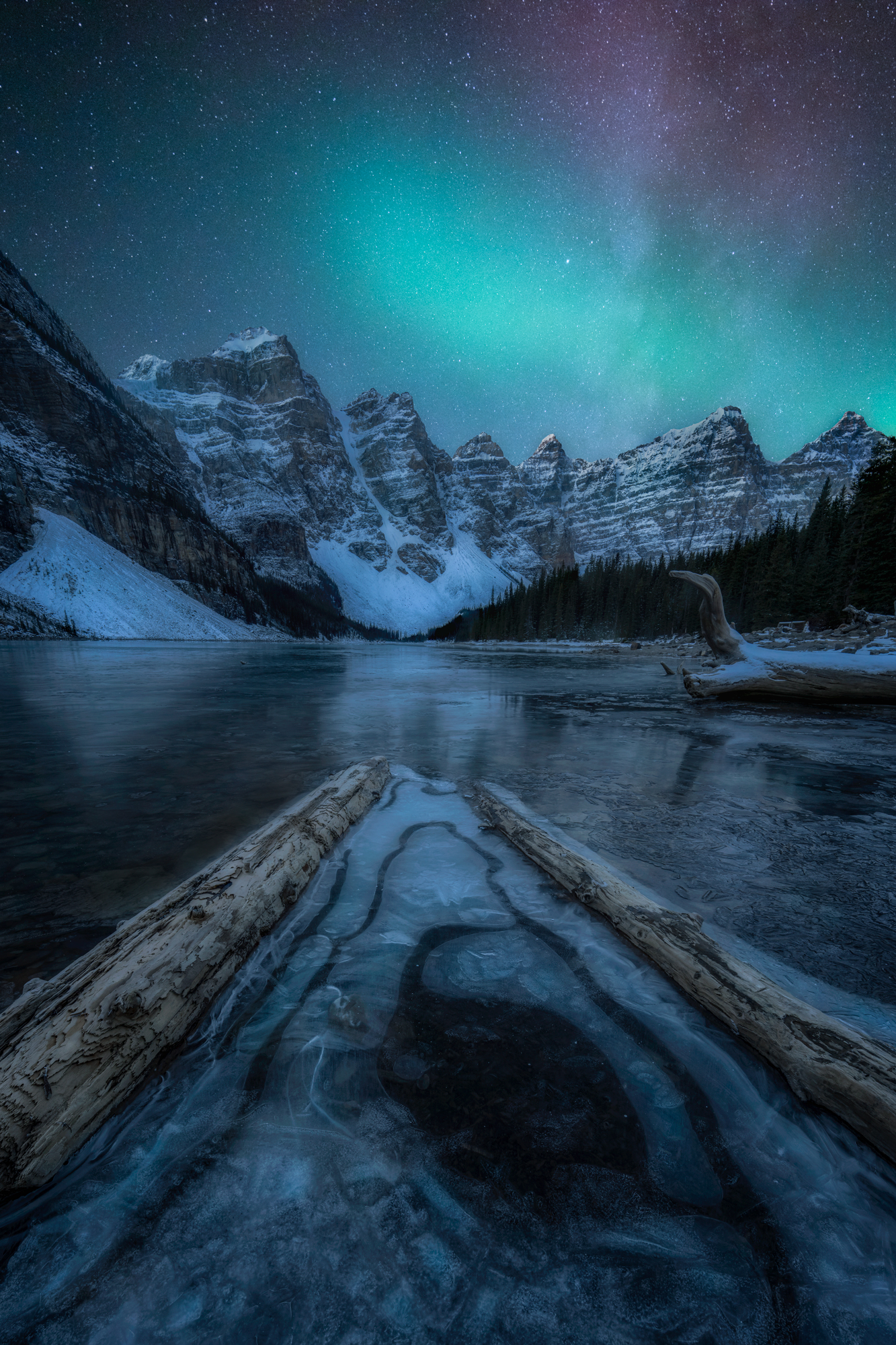 The second reason why we will see increased solar activity in 2023 is because we are approaching solar maximum for our current solar cycle (Solar Cycle 25). Solar activity (and associated Northern Lights) falls in 11 year cycles. During solar minimum aurora storms can be seen but are infrequent. During solar maximum, solar storms increase in both their frequency and intensity, consequently resulting in more aurora activity! After what feels like an eternity, solar cycle 25 is ramping up towards solar maximum; it is expected to reach solar maximum between 2023 and 2026. The next few years will bring more frequent and bigger displays of the Northern Lights!

What to expect on this workshop

We will shoot from sunset to sunrise, and sleep during the day. If we do not get clear nights we will explore the wintry beauty of the Canadian Rockies during the day. 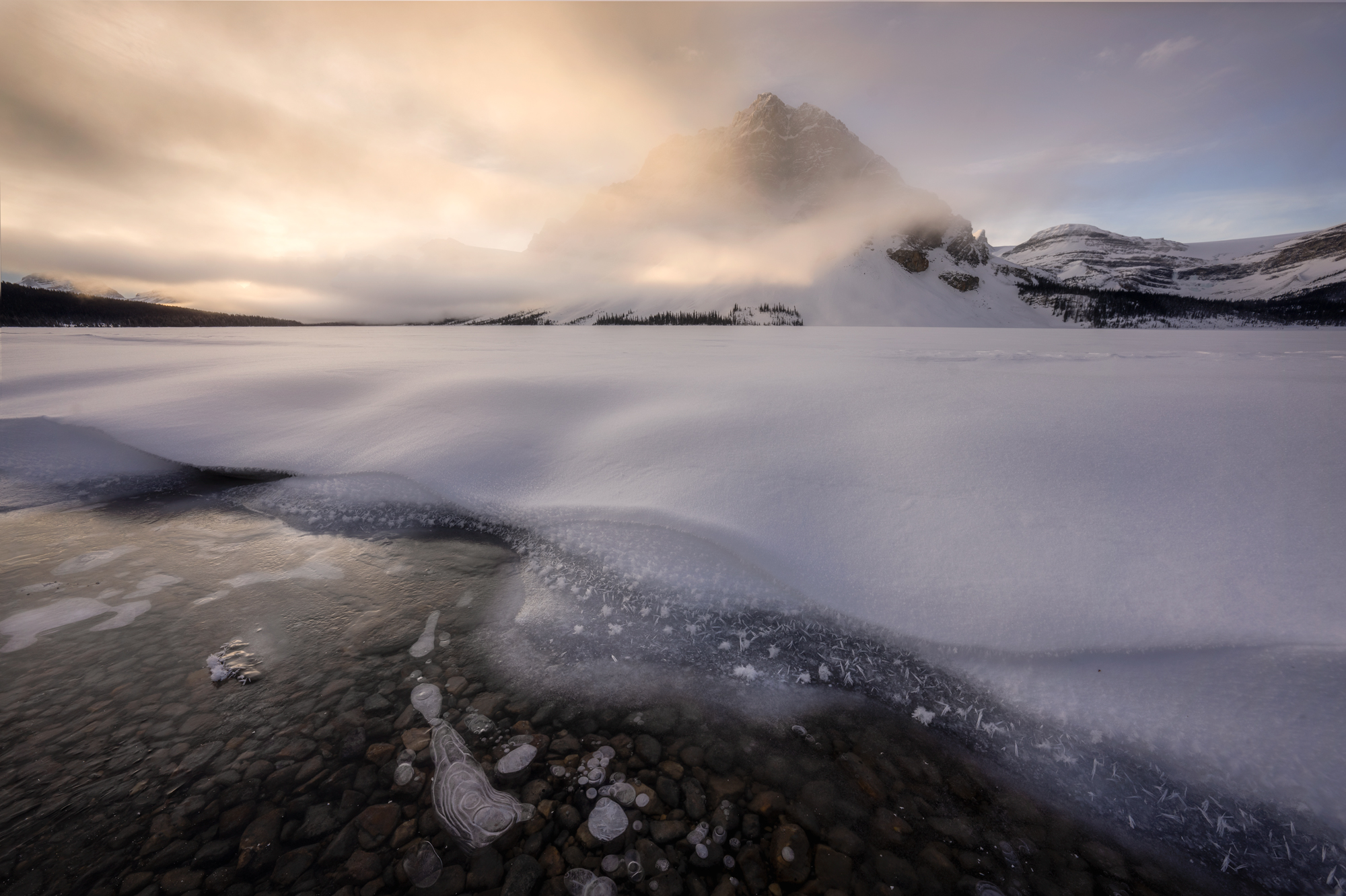 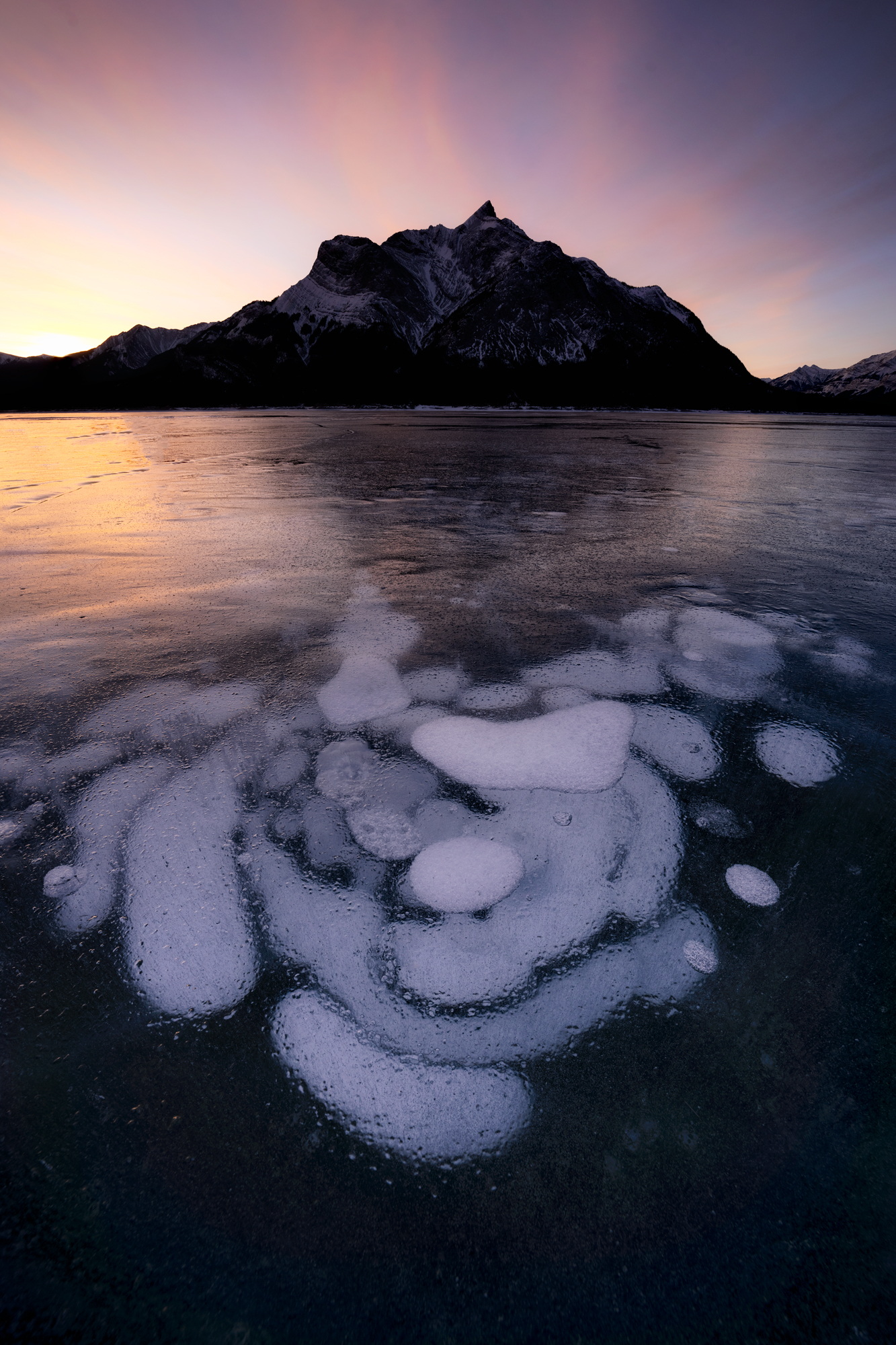 The Chasing Orion photography workshop includes lodging and transportation. We will use the iconic Emerald Lake Lodge as our home base. It is a great location for shooting the northern lights, just steps away from your cabin! 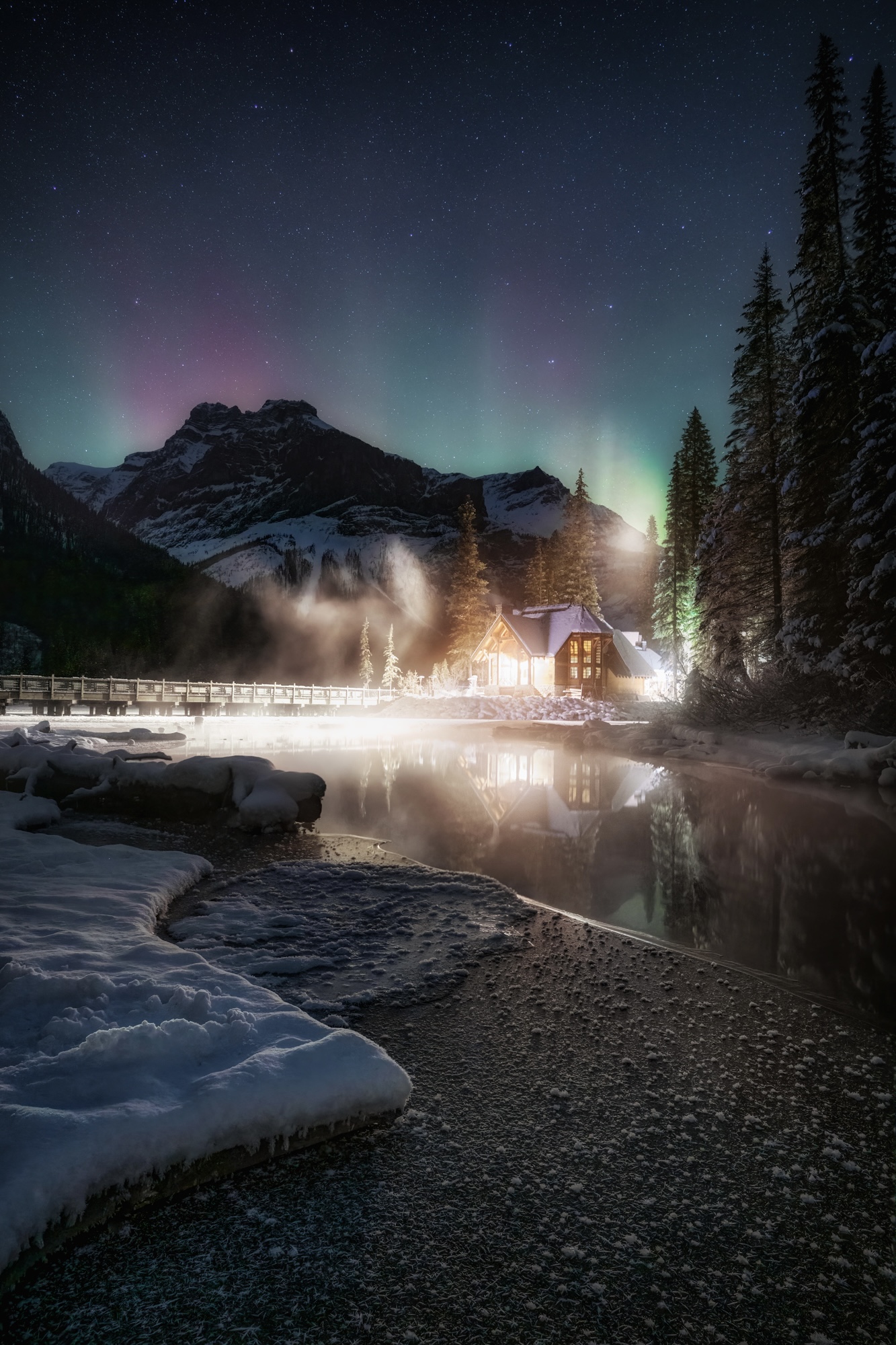 I want you to feel confident in your night shooting skills before you arrive on location. We will schedule two online classes in advance of the workshop to cover the basics for capturing the sharp stars and aurora so you are well prepared when you arrive. 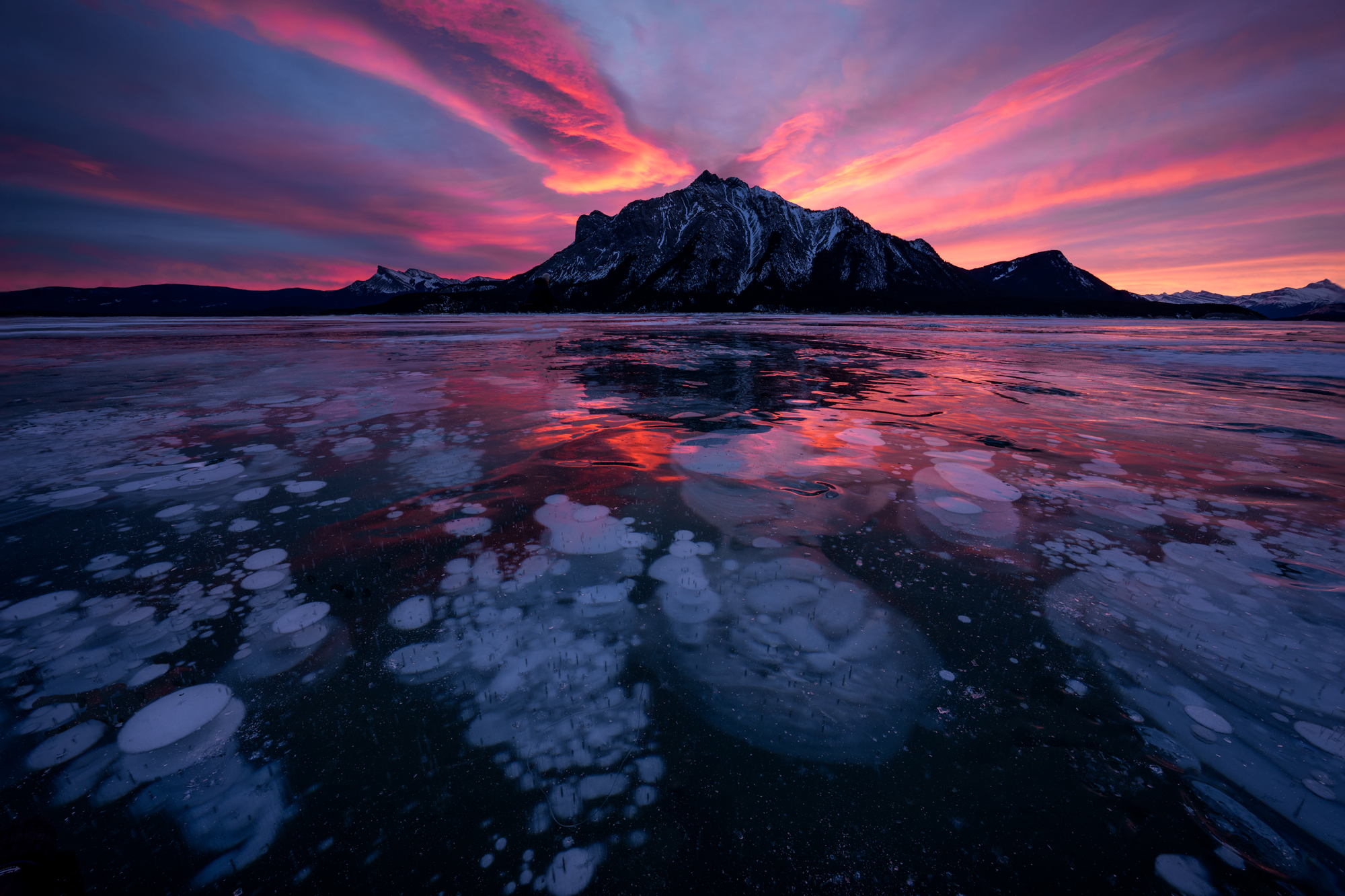 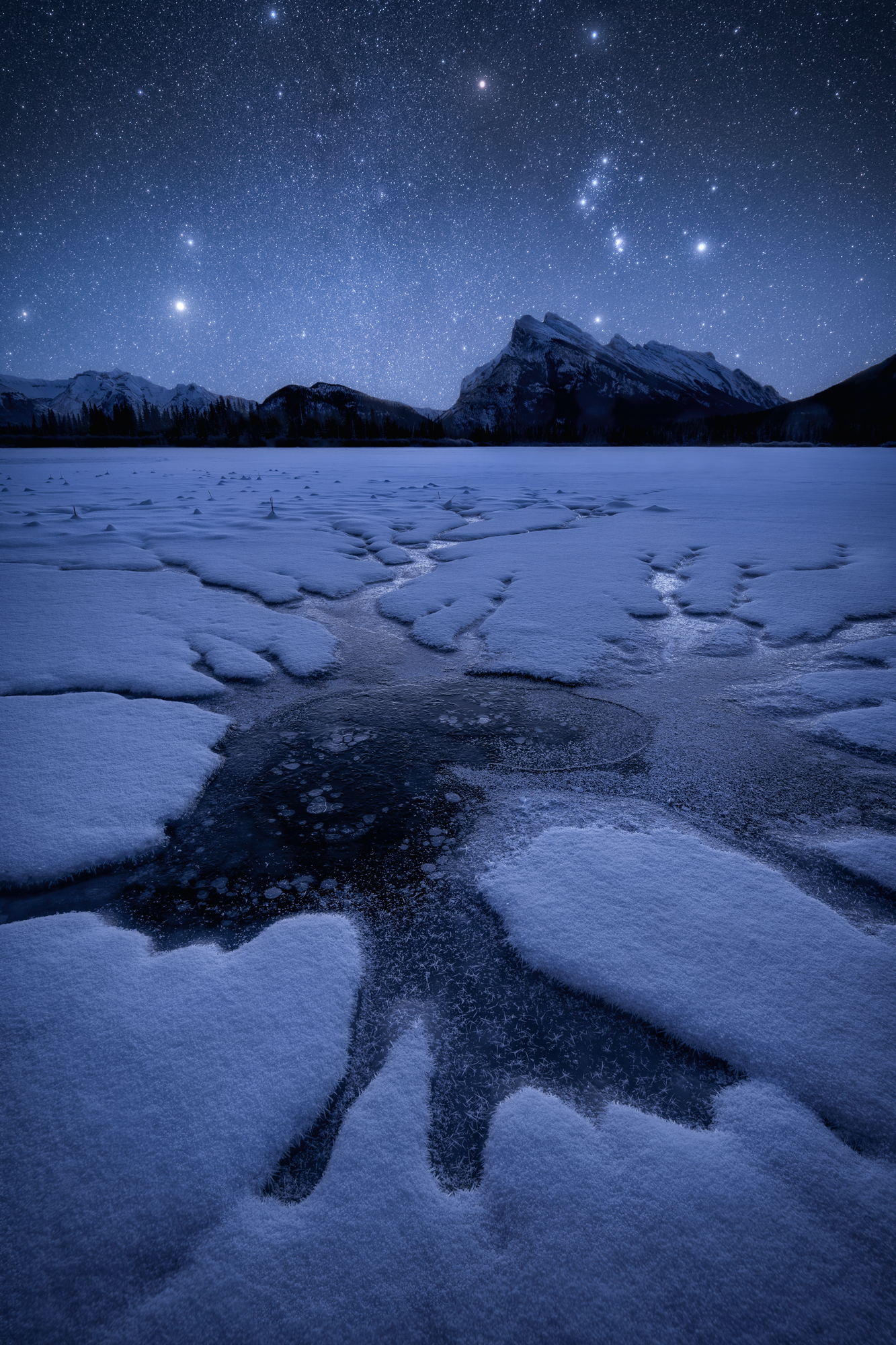 We have six nights and seven days to fill your memory cards!

*Before Covid, deposits were non-refundable. However, I’m trying to be as flexible as possible. In the event that you cannot attend, deposits can be credited toward another workshop at a later date. 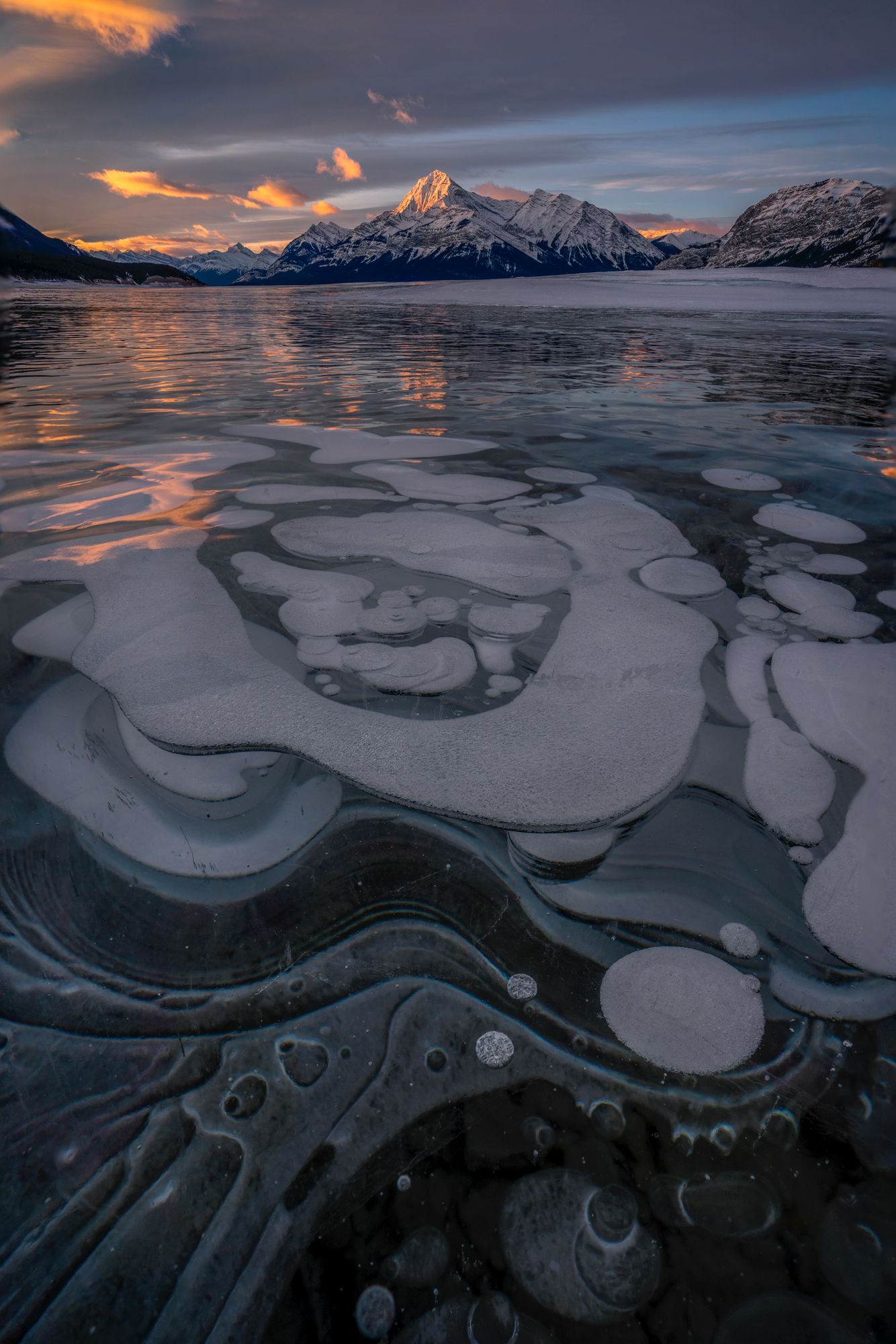 There is little that inspires me more than a sky full of stars! Last year I embarked on a personal project to spend 100 nights under the stars. That project really opened my eyes to the incredible beauty of the night sky, in ways that I had never anticipated. I had always thought about night shooting as getting out on the darkest nights to shoot the Milky Way or aurora. However, I soon learned that  moonrise and moonset can be completely captivating, that moonlight is an ally to capturing the aurora, and that winter nights are most captivating, even in the absence of the Milky Way core.

I am a passionate educator. It is my goal to ensure you leave this workshop with the skills and confidence to shoot in any low light situation.

Please do not hesitate to contact me if you have any questions!